What Do You Call a Japanese Lunch Box?

Sushi, ramen, and even Japanese barbecue are all the most favorable lunch alternatives in Japan. No matter where you are, you might find yourself eating lunch at a different place! However, the bento box, a Japanese-style lunchbox, is a practical way for many Japanese people, from students to politicians, to enjoy their midday meal. Indeed, one of the amazing complexity of Japanese eating culture is the bento box. You should definitely try it because it is a cheap and widely used meal option in Japan. Read on and learn more all about the Japanese lunchboxes, the Japanese Bento Box.

What is a Bento in Japanese? 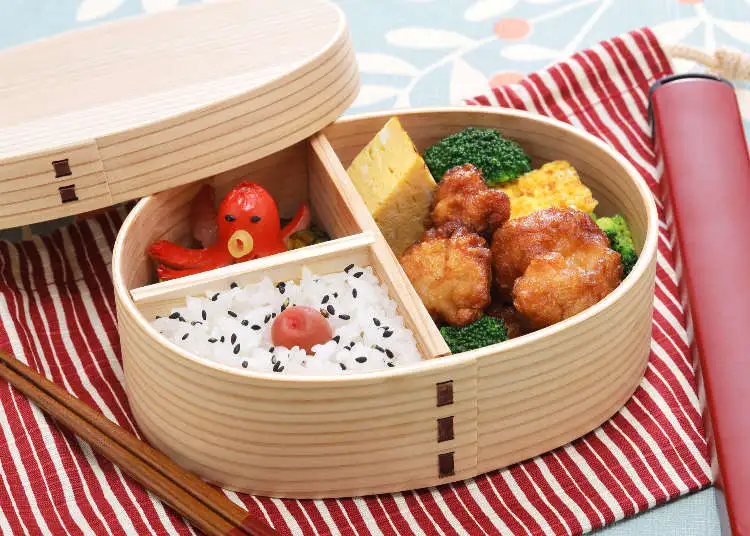 A "bento" or "bento box" is a straightforward Japanese lunchbox. The attention to detail and the balance of the ingredients set it apart from the lunchbox from elementary school. A well-designed bento lunch should be a full meal with various flavors, textures, and food groups. Whatever is contained in the traditional Japanese bento box, the items are all neatly tucked into containers that are typically on the deeper side, more shaped like rectangular bowls than flat plates, and satisfying to look at as well as dig into. In Japan, supermarkets, convenience stores, railway stations, and specialty bento shops all carry prepared bento boxes. Bentos are also available for takeout at some restaurants.

What is the History of Bento Boxes?

Bento lunches dates back to the Kamakura period in the 12th century, when Hoshi-ii or, literally, "dried meal," a cooked and dried rice product, was created to be carried to work. Hoshi-ii can be eaten as is or cooked with water and is kept in a small bag. Additionally, the first traditional Japanese boxed bento that we are familiar with today was created in 1568, during the Azuchi-Momoyama period, using wooden lacquered boxes that were expressly made for the purpose.

Then, the bento became a common meal during the Edo period (1603–1867), with ingredients and presentation varying according to social class and occupation. Koshibento (waist bento), which frequently contained riceballs wrapped in bamboo leaves, was carried by tourists and travelers. Large, layered bentos were created for special occasions like hanami (flower viewing parties) to commemorate the occasion.

Furthermore, the first "train station bento," which consists of two onigiris and a serving of takuan (pickled radish) wrapped in bamboo leaves, was sold during the Meiji period (1868–1912). Aluminum and plastic were first used in bento-style preparation in the 20th century, which led to the invention of the microwaveable konbini bento (convenience store bento), ekiben (train station bento), and hokaben (take-out bento). Depending on the location, this bento was often constructed using traditional Japanese dishes such as white cooked rice, rice combined with millet, or potatoes.

What is the Different Type of Bento Box?

The most basic kind of bento is a suitable lunchtime choice for Japanese cuisine. The Japanese word Hinomaru, which translates to "circle of the sun," makes one think of the country's flag. The two main components of this bento are a side dish of fish or pork and rice with a single red umeboshi on top (pickled plum). The plum, which serves as a natural preservative and symbolizes the red dot on the Japanese flag, preserves the meal from going bad. 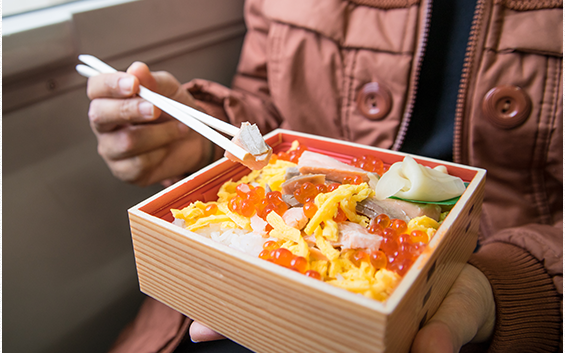 These lunchboxes, which combine the terms eki (train station) and bento, are sold at railway stations on the platform and inside the cars. The ekiben is a full meal served with a set of disposable chopsticks in a box made of plastic, wood, or ceramic. The lunchbox usually contains local staple foods, and some stations have gained national praise for the excellence of their bento boxes. Other East Asian nations, particularly Taiwan, have seen a rise in the popularity of each packed meal served on trains that resemble one another. 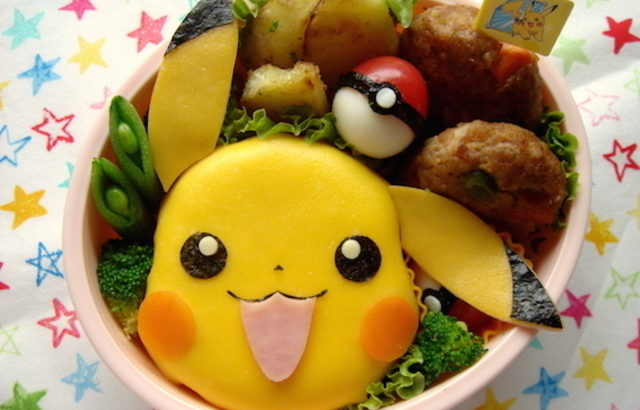 Kyaraben ("character bento") are lunchboxes that are typically created for kids and contain rice and other bento box foods that have been shaped and created to resemble well-known characters from anime, manga, or video games. The shapes and likenesses of beloved characters must frequently be created carefully by the maker of these labor-intensive preparations. Some of the most well-known shapes you'll see rice rolled into include Pikachu, Hello Kitty, Angry Birds, and other delightfully round creatures like pigs and cows.

Seaweed sheets are carved into eyes, whiskers, and other details to give the food forms personality. The cute characters help persuade kids to eat foods they don't particularly enjoy and add some color to the typical lunchbox. Kyaraben may also feature animals or natural landscapes in addition to well-known personalities to reflect the season or a special occasion. 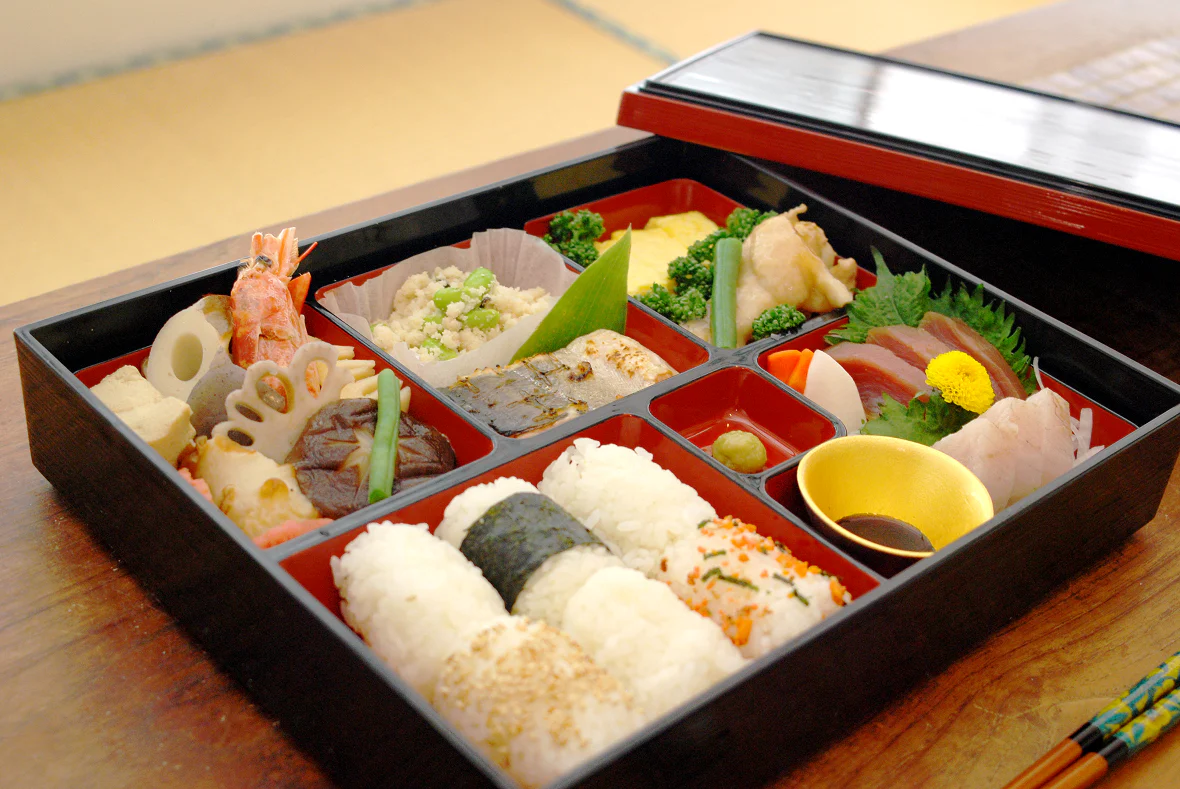 These two-section bento boxes, which are typically purchased in convenience stores, supermarkets, and department stores, are prepared by caterers. The box has a rice dish on one side and a few small side dishes on the other. Furthermore, this bento is often used by actors and spectators. They would receive this kind of bento as lunch in between performances at Kabuki theaters. 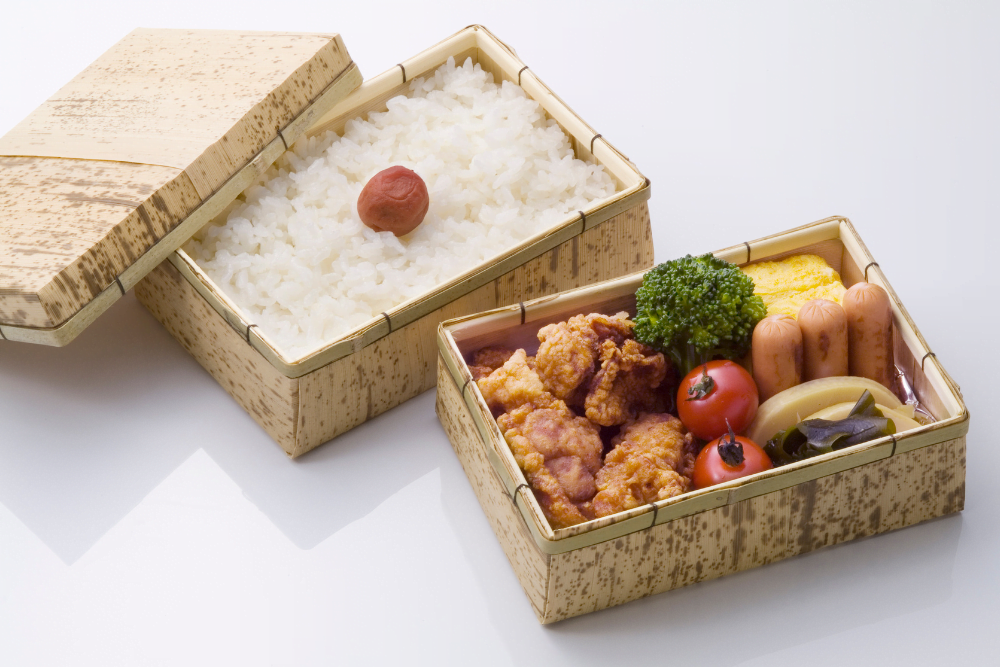 Koraku bento, which in Japanese means "picnic lunchbox," are intended to be shared by a small party. They are most used in late March and early April when hanami (cherry blossom viewing) season is in full swing. The ingredients in the lunchbox are specifically picked to match the season in which it was made, just like many traditional Japanese food. Standard cuisine in a Kotaku bento includes makizushi buns and onigiri rice balls. 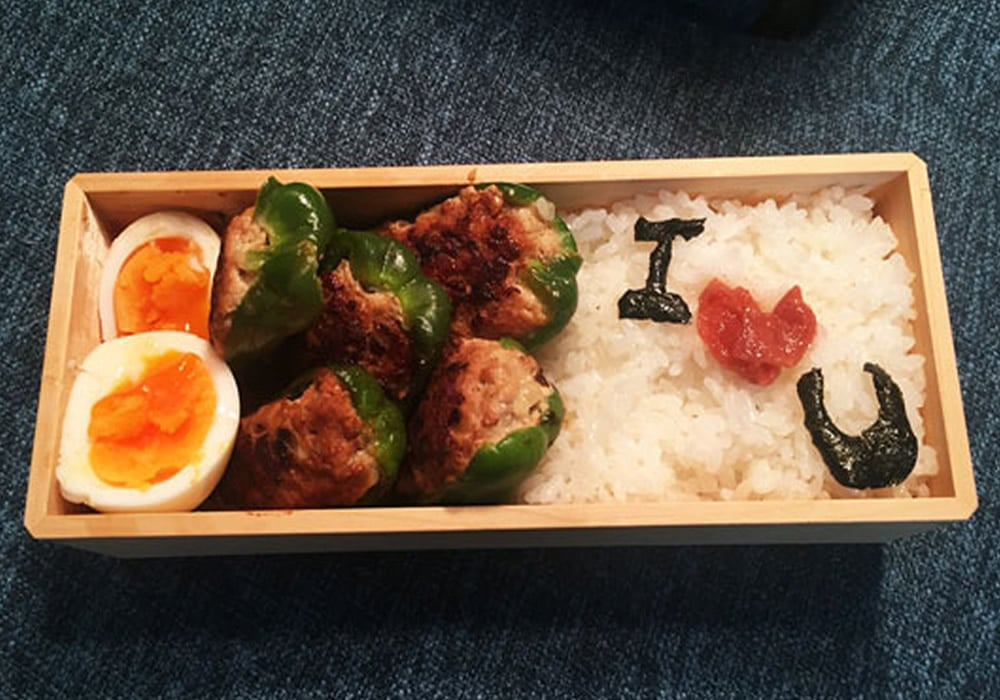 The aisai bento, which translates to "bento created by loving wives," is what it sounds like. The mother prepares this particular meal for her husband to be taken to work and prepares lunch for the kids. Similar to this, young women in relationships will occasionally make their partner a handcrafted bento during the hanami season. Aisai Bentos, on the other hand, frequently contains specially prepared delicacies and charming, romantic words written with furikake seasoning.

How to make the perfect bento box? 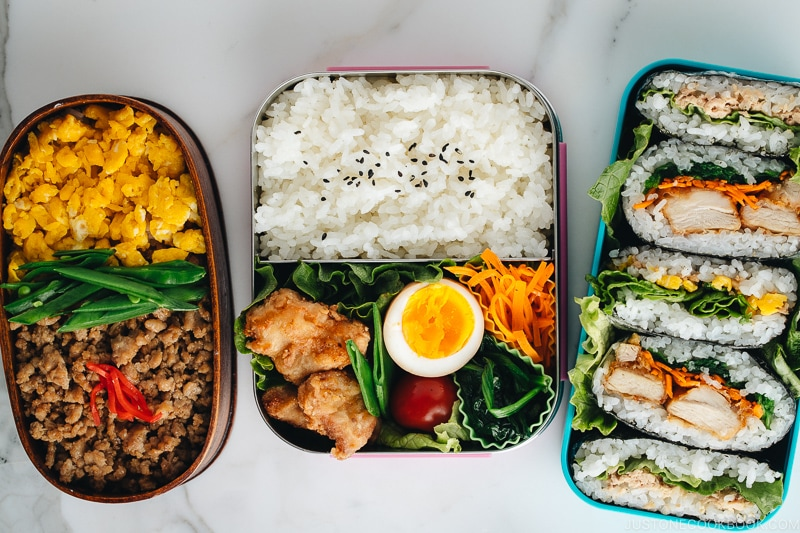 One main advantage of bento boxes is that they can be completely customized. Many enjoy experimenting with various food combinations, recipes, and flavors when making their typical bento boxes. Despite the limitless personalization, bento boxes generally follow a few rules. Vegetables, proteins, and carbs are frequently present. Some people also decide to provide fruit or dessert. 4:2:1, or 4 parts rice to 2 parts protein and 1 part other items, is the ratio used in traditional Japanese bento boxes. But 3:2:1 and 1:1 ratios are also quite popular, particularly for people seeking to limit their caloric consumption.

In light of this, bento culture is essential to prepare the bento designs and the various components in advance. Each ingredient should be prepared individually to preserve its flavors and textures. Consider pairing mild egg noodles with sweet, lightly acidic pickles, chewy rice with crinkly veggies, and juicy fruit with supple, savory meat. Combining sensations in this way also promotes satiety, making it a useful suggestion for enhanced enjoyment and health.

What ingredients are in a Japanese Bento? 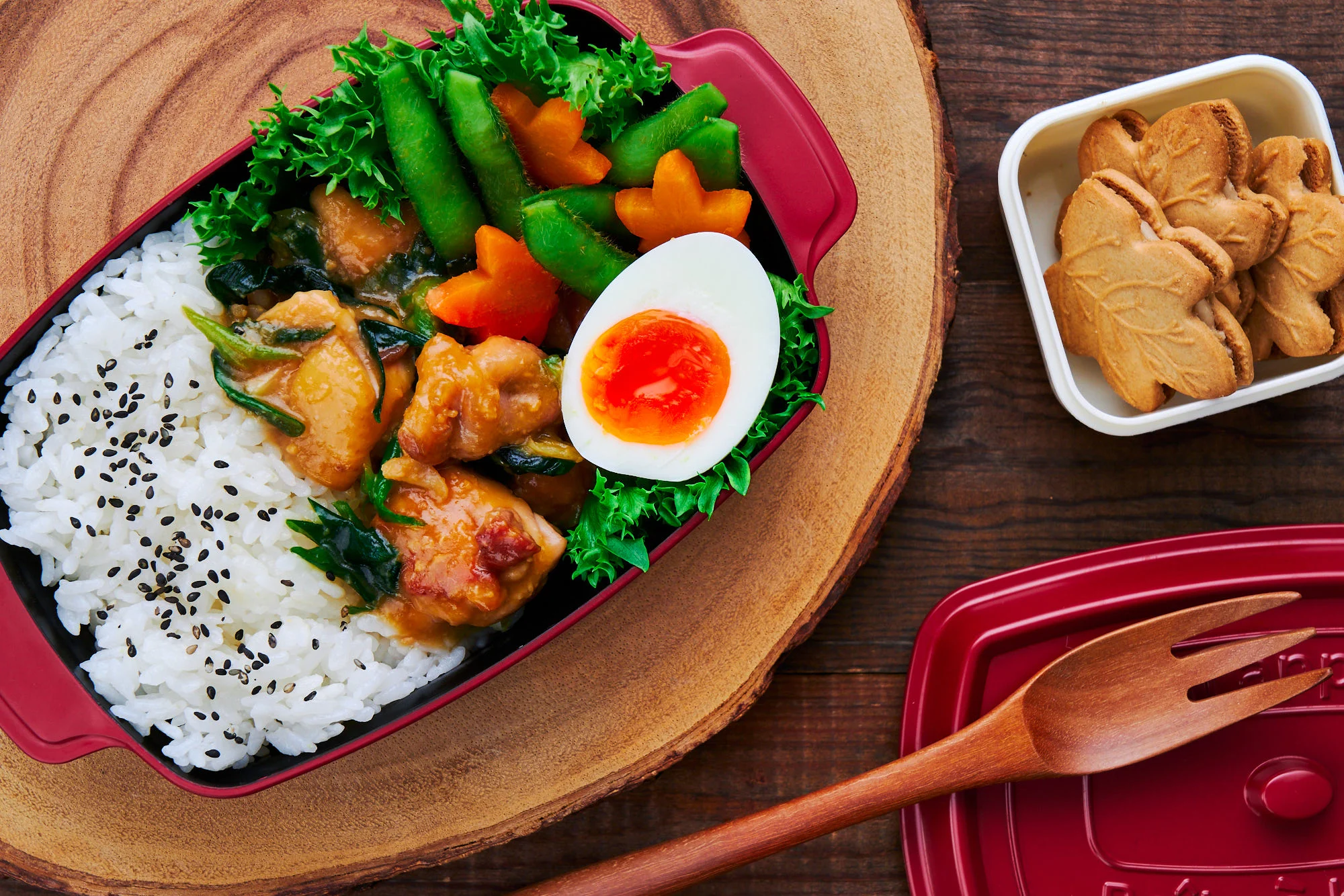 In bento boxes, you can find a few typical ingredients. You'll discover salad, edamame, cooked rice, and an omelet. The list of additional ingredients also includes carrots, cilantro, tofu, eggs, green beans, mushrooms, and shellfish (for karaage). A balanced meal with a variety of foods is included in a bento box, making it incredibly healthful.

The most common carbohydrate choice for a bento box is rice. Although there are numerous ways to prepare it, short-grain rice that has been steamed is the most popular. Many people also enjoy making onigiri, rice balls that may be shaped into various objects or characters for your chara-ben. Moreover, Furikake (dry rice spice) or umeboshi (pickled plum) are some fantastic seasonings to sprinkle on top of your rice to add flavor to your bento box.

Japan has a wide range of choices for bento boxes available in various shapes, sizes, and materials. Many options fit any taste, including stunning traditional Japanese designs, anime characters, modern simplicity, and more. Some bento boxes also come with portable utensils, including chopsticks, forks, and spoons. Check out the Sugoi Mart bento box collections, which range from a two-layer, securely packed wooden bento box to a limited-edition lunch box that will keep your food both stylish and safe.

Japan crate offers the prettiest and cutest Japanese goods only available in Japan for a price you'll adore. Japan Crate has a subscription box for anything cute, the Doki Doki crate! This crate includes plush toys, collectibles, furniture, clothes, and miniatures, and the bento lunchbox is n exception. Have a box filled with cute kawaii items, stickers, toys, and deals delivered to your house with a Japanese content theme each month. The Japan Doki Doki Crate: Kawaii Subscription Box will add some kawaii flavor to your life.