When Is Pocky Day?

In Japan, there are many delectable cuisines to choose from, like sushi, ramen, and onigiri. But that's not all; the Japan snack game shouldn't be overlooked. Japan also produces excellent candies, cakes, and biscuits, and Pocky is no exception. Pocky is a chocolate-covered biscuit stick among the most popular treats in Japan. In fact, when looking up Japanese snacks online, you can usually find a picture of the instantly recognizable chocolate-covered cookie stick. Since it has been available in Japan for more than 50 years, Pocky has become one of the most popular snacks globally. In Japan, Pocky is available in a huge selection of flavors, the bulk of which are unique to that nation. Read on to learn more all about Pocky and the surprising obsession of the Japanese with Pocky.

What exactly are Pocky Sticks? 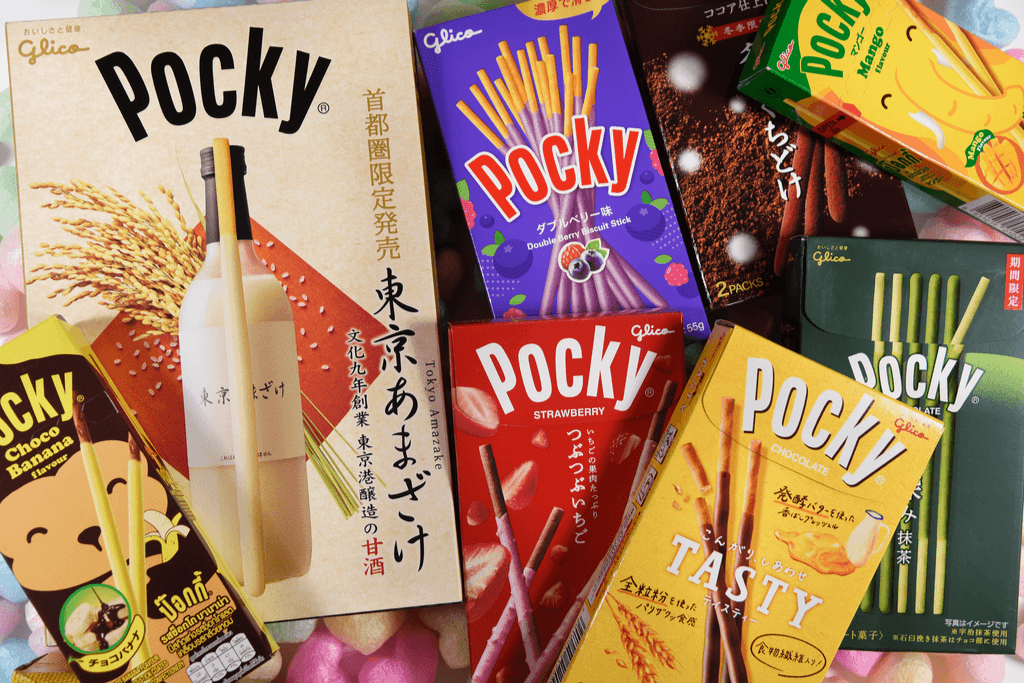 Pocky is a thin, sweet stick treat or biscuit with a flavoring, like chocolate, on top. Additional toppings may be coated or sprinkled on top of it as well. The new treat was first called chocotekku, but then the name was already trademarked, they called them Pocky. It was revealed that the onomatopoeic phrase pokkin, which describes the sound it produces when you chew it, gave the Pocky stick its name. Pocky Sticks are around 21.5 cm long and are now available in a range of flavors to please even the pickiest snack enthusiast. Pocky Sticks are the ideal shared snack since they have the added benefit of a "no mess handle," which prevents children from getting chocolate on their hands. 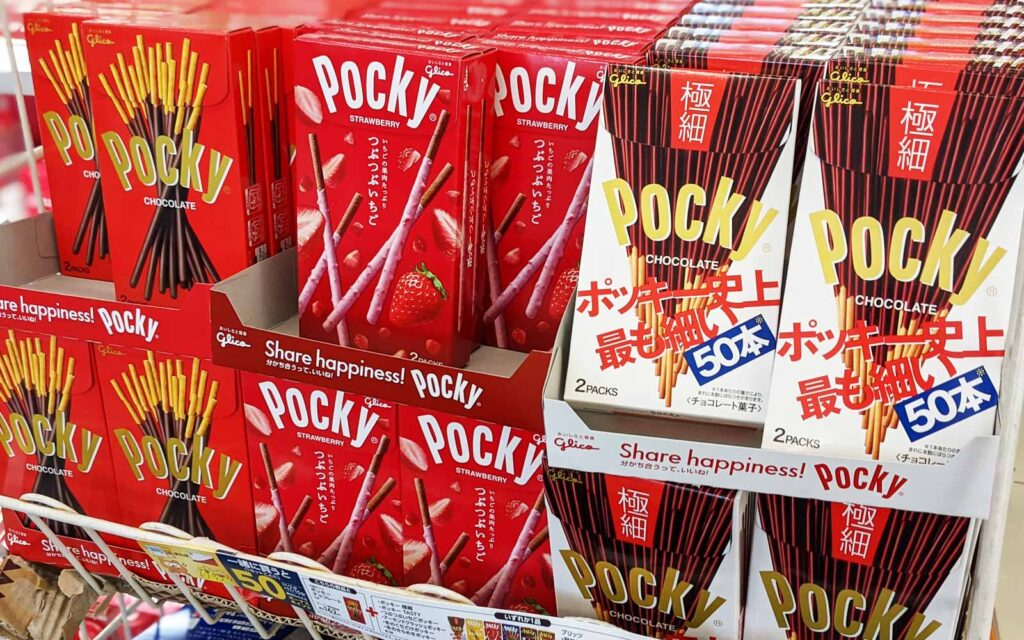 The history of Glico as a company goes back further. Glico Caramel was created in 1922 after Riichi Ezaki created his well-known caramel candy. These candies were first sold in Osaka's Mitsukoshi Department Store and were the first to come in the distinctive red Pocky box. In 1925, Ezaki built a plant in Osaka's Kita neighborhood, and in 1936, it expanded to Tokyo. Even though both plants and the Dalian factory in China were destroyed during World War II, Glico Co. wouldn't reopen until 1951, but brand awareness remained unaffected.

When Pocky was first introduced in the middle of the 1960s, the only chocolate available in the country was imported from the US and Europe. Although Pocky sticks were popular, the first batch had a number of flaws, the most notable of which was the entire stick was completely covered in chocolate, leaving consumers with sticky fingers after eating Pocky. The company's designers knew that when someone eat chocolate, Pocky would make it messy to eat before it was made available to consumers. In order to make the product easier and more aesthetically pleasing to hold, they cunningly left a part at the end. When Pocky first hit Japanese store shelves, it quickly gained enormous popularity. Over time, they not only increased their flavor variety but also exported it to other countries. Glico Thailand was established in 1970, and after expanding to China, France, Canada, and the United States in the 1980s and 1990s, it finally solidified its status as an iconic Japanese snack in 2003 until now that it even appears in bars served alongside ice water and have its own holiday. 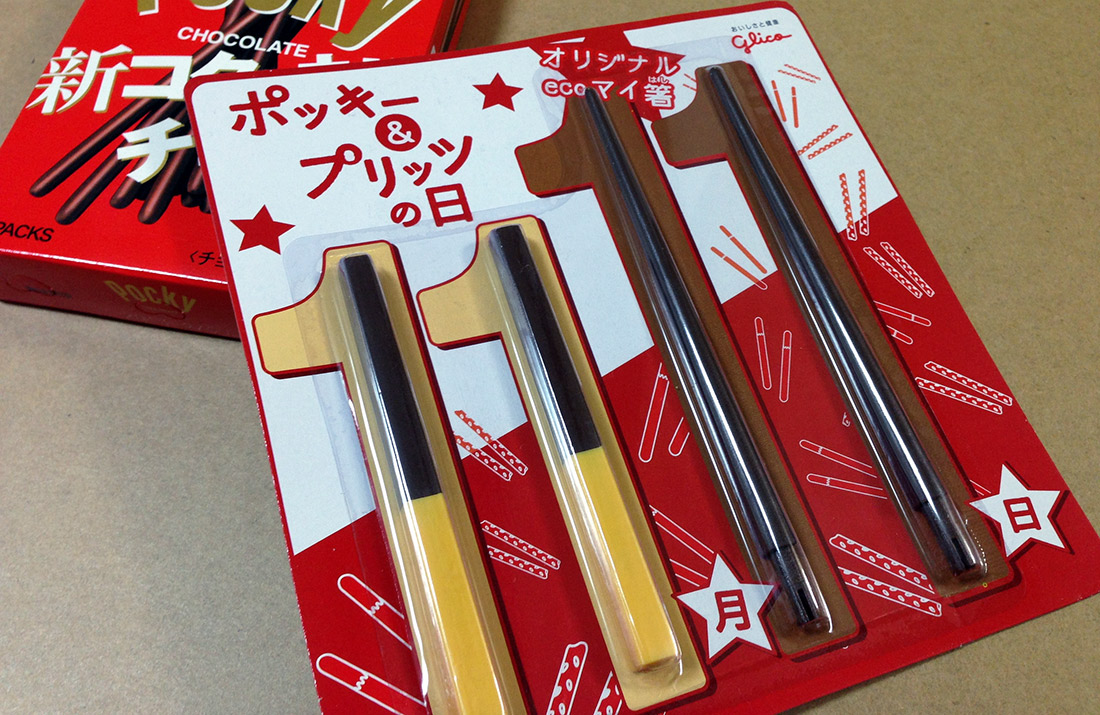 Japan celebrates Pocky Day every November 11 (11-11) because the date is made up of ones, and the shape of the ones is similar to a Pocky. But the minds behind Pocky didn't see it that way. Pocky Day, also known as Pocky & Pretz Day, is a Japanese marketing event for Pocky and Pretz, two Ezaki Glico brands of long, thin biscuits that fall halfway between cookies and pretzels. Indeed, the snacks were honored on November 11 because they resemble number one. Ezaki Glico Food Corporation has promoted Pocky Day since 1999, which is recognized as a remembrance day by the Japanese Anniversary Association.

Furthermore, Ezaki Glico arranges an advertising campaign, as well as competitions, team-ups, and other events, for Pocky Day every year in Japan. In Osaka, events frequently take place close to the Tsutenkaku tower. On the day and in the days leading up to it, Ezaki Glico distributed Pocky and Pretz outside and put up Pocky-related games. 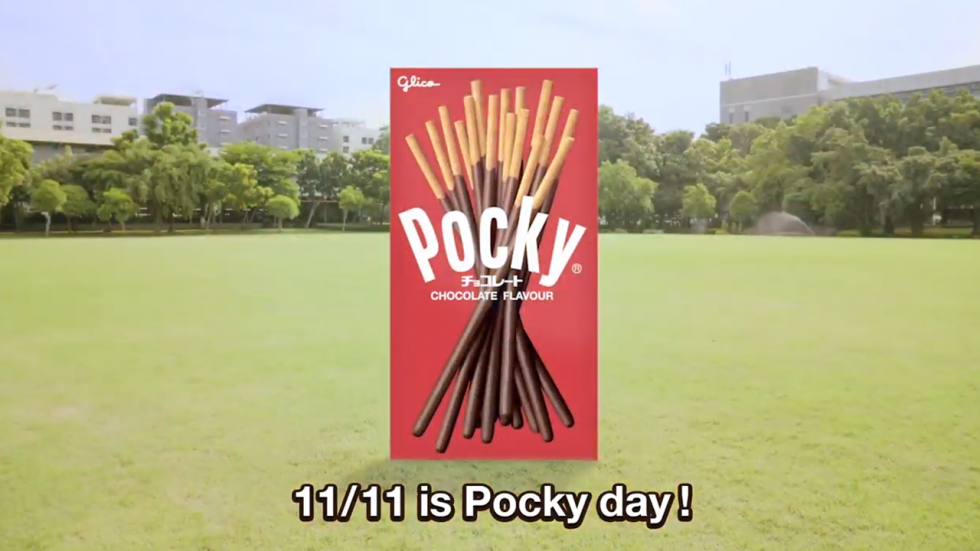 Consumers in South Korea began celebrating Pepero Day on November 11, starting in 1994, after Lotte, a South Korean food manufacturer, began selling Pepero, a comparable product and a rival company of Pocky. Lotte started marketing the holiday in 1997, and Pepero's appeal grew over time. According to one legend, the custom was founded by two schoolgirls in Yeongnam. On November 11, 1994, they allegedly consumed Lotte Pepero in an effort to grow tall and trim. The reasoning goes as follows: Having a stick-shaped date will result in you having a stick-shaped body. Others in Korea started eating Pepero on 11/11 after word of the story spread. Lotte made the decision to take advantage of the trends in 1997 and formally launched its promotion of Pepero Day. Pepero Day became so well-known by 2012 that it contributed 50% of Lotte's annual profits.

The same could not be true for Pocky back in Japan. Therefore Ezaki Glico made the decision to take action and created Pocky Day. They started a significant promotional push and founded Pocky Day, which is also on November 11. The company started advertising and designated November 11, 1999, as Pocky Day. 1999 may seem like a strange year to start a holiday, but it's not. The year 1999 is the eleventh Heisei year, according to the Japanese calendar. So on November 11, 1999, the time in Japan was 11:11:11. Since then, Glico has just persisted in bombarding November 11 with promotions until everyone has come to accept it as a legitimate explanation for partaking in Pocky consumption.

What to do on Pocky Day? 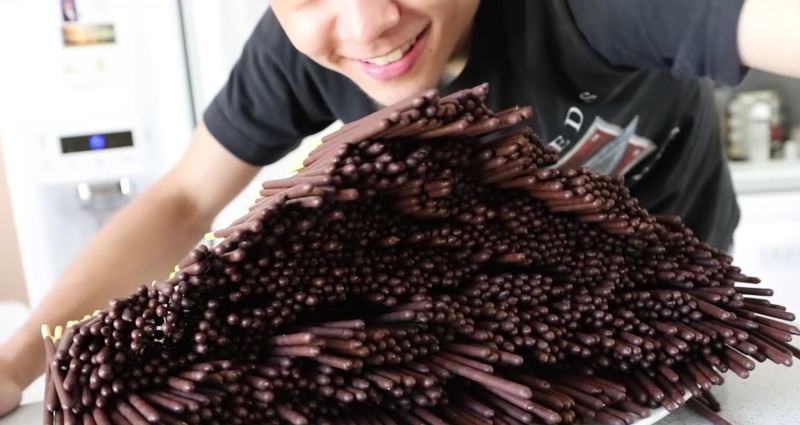 You can celebrate Pocky Day in the greatest possible way by sharing your favorite Pocky flavor with your friends and family. Invite your family and friends to a Pocky-themed party and play the Pocky game. Use the hashtag #PockyDay when posting photos of you and your pals enjoying Pocky on social media. In fact, a "World Challenge" was held by Glico in 2014 from October 14 to November 11. They requested submissions of photos of participants holding Pocky from individuals all around the world. Naturally, they succeeded in breaking the guinness world record for the "Largest Online Photo Montage of Cookies/Biscuits," which was the explicit goal of this endeavor.

Moreover, Pocky was the most tweeted brand name and snack in 2013, with 3,710,044 tweets in 24 hours. There is a Pocky truck tour, whereas the Pocky truck tour has given away 1.5 million Pocky boxes since its launch in 2013. Perhaps going somewhere and handing out Pocky is too ordinary for you. Glico ups the stakes with Pocky Rockets, though. On November 11, 2013, at 11:11 a.m., Glico decided to recruit a team to launch rockets in the shapes of Pocky and Pretz. They built a website where people could make their own digital Pocky Rockets and launch alongside the actual rocket in the run-up to the launch. Also, Ezaki Glico created the Pocky Pole Project, where different skydivers went up 1,111 meters, jumped, and dropped giant Pocky onto a giant target. Pocky Day is the ideal time to try Pocky if you've never done so. Purchase a variety of Pocky flavors, then indulge. You'll soon discover that you're in love.

Pocky fans can find some of the product lines in our monthly Japan Crates! We have the best flavors of Pocky in our products that you can explore and buy. Japan Crate offers a monthly box of authentic Japanese things. At Japan Crate, you may buy the finest and rarest Japanese goods for a very affordable price. Every consumer may easily get snacks and other products from Japan thanks to Japan Crate. It won't take more than a week for the Japanese item you ordered online to arrive. Worldwide, Japan Crate provides dependable and efficient delivery and shipping services. You only need to sign up for our subscription plans here.

If you cannot find your favorite flavor in the sticks, let us know, and we will try our best to make it available for you, or check out our second store for your personal selection of Pocky sticks on Sugoi Mart Pocky collectibles. Get your first subscription box today! Enjoy.